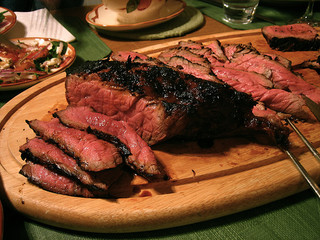 It is no wonder that we are all confused about what to eat. One day we are told fat is bad, the next day that carbohydrates are bad, and finally that protein is bad. Considering that carbohydrates, fat, and protein are essential macro-nutrients, we don’t have much left to eat.

A recent European study demonstrated that adults who eat the most protein, especially from animal sources, are more likely to be diagnosed with type 2 diabetes.

What?  To prevent diabetes, aren’t you supposed to stay away from excess carbohydrates, especially refined and processed carbohydrates?

Eating too many carbohydrates leads to excess glucose in the bloodstream, which then signals the pancreas to over-secrete insulin.  When this happens on a daily basis, the cells start to become insulin resistant, meaning that they no longer hear the message from insulin to take in the glucose; and then your blood sugar remains high.

What about this new study?  The new study did not randomly assign participants to eat different amounts of protein. In other words, it was not a controlled study. Instead, it examined data from a large previous study of adults in eight European countries over a period of twelve years.  These adults were followed to see who developed diabetes and who did not develop diabetes.  Of course, the study collected data on the participants’ diets, as well as their physical activity, height, weight, and waist circumference.

The association between animal protein and diabetes risk appeared to be strongest among obese women and non significant in men. (2) People who ate the most protein got about 15 percent of their calories from red meat, processed meat, poultry, fish and dairy.

A couple things to consider here:

First, the association between animal protein and diabetes risk was strongest among obese women.  We already know that being obese is a major risk factor for type 2 diabetes.  This has been established.  Fat cells produce all kinds of pro-inflammatory chemicals, and we have learned that inflammation is at the root of all chronic disease.

Second, was the quality of the animal protein evaluated?  Were the animal protein sources grass fed or pasture raised?  Or were the cows and chickens fed grains?  We ultimately eat what the animals eat.  Research has shown that grass fed beef has a significant higher level of total Omega 3 essential fatty acids and also contains more conjugated linoleic acid (CLA) than grain fed beef.  (3) Omega 3’s are converted to chemicals that are ultimately anti-inflammatory and CLA has been found to aid in weight loss and be cancer protective!

I must say that I do not feel totally convinced by this study that higher amounts of animal protein increases risk of type 2 diabetes.  There are just too many variables.

So how do you figure out how much protein, carbohydrates, and fat to eat?  A really good place to start is to look at your genes!  You can now test certain genetic markers that will help you determine the right amount of protein, carbs, and fat for you  to eat – to obtain and maintain a healthy metabolism and weight!